If you’re in the market for a security system a major component you’re probably considering is video surveillance.  While doing a little research you’ve likely come across a plethora of surveillance options with various technological features.  It may seem like a daunting task to choose the cameras that suit your needs, which is why you should always consult a licensed security systems professional.  They’ll be able to assess the security risks associated with your facility and provide optimal solutions.  Our team at Perfect Connections, Inc. has been providing comprehensive security systems to businesses throughout northern and central New Jersey for the past 23 years.  We understand the process and can help you protect what matters most.  Our experts are knowledgeable in all aspects of security system integration including surveillance.  Whether or not you’ve done your own research it’s likely you’ve heard or come across the term megapixel.  What does that mean in regards to surveillance systems, and what are the advantages/disadvantages? 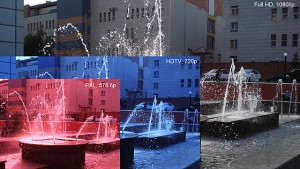 To understand the relationship between megapixels and video surveillance let’s first figure out what megapixel means.  A pixel is a “picture element residing on the image sensor (in a camera).”  The quantity of pixels helps determine the resolution of an image.  All megapixel cameras have a minimum of 1,000,000 pixels which means the image is comprised horizontally and vertically 1,000 x 1,000 pixels.  In recent years there has been an increased demand for megapixel surveillance cameras over the standard definition cameras widely used in the past.  Standard resolution cameras typically have a resolution of approximately 400,000 pixels.

A major advantage to investing in megapixel camera technology is the ability to use less cameras to cover larger areas.  With standard definition IP (Internet Protocol) or network cameras coverage is significantly limited and typically requires more cameras and cabling.  Megapixel cameras require less cabling and therefore the cost of labor and cabling is typically less than installing standard resolution cameras.  The ability to digitally zoom-in on an image without losing clarity is another benefit of utilizing megapixel cameras.  Megapixel recordings are clearer than standard resolution cameras therefore more consumers are storing footage for longer periods of time, which can be helpful in solving crimes.  They decrease the need for constant live monitoring as the footage can be revisited with ease.  Other benefits include a long lifespan, they conserve energy, and they are low maintenance.

Megapixel cameras not only benefit the owner but different industries as well.  With more quality recorded footage being stored the more the recording and storage industries will grow.  As megapixel cameras become more ubiquitous, technologies used in conjunction with them will grow and change.  For example the types of video displays and lenses will likely become more developed.  While there are many benefits to megapixel cameras the potential drawbacks include initial cost of installation and the challenge of keeping up with the fast paced technological changes.  Fortunately, as these types of cameras become more widely used their pricing will be driven down.  As far as technological advancements are concerned there will always be changes and improvements it’s a matter of security system experts providing ease of integration and updates.

While you now have a little background on megapixel cameras and their advantages/disadvantages, it’s still imperative to contact a licensed professional for your security needs.  They’ll be able to assess the specific security risks associated with your facility and which products will work best.  Our team of experts at Perfect Connections, Inc. have been providing professional service to businesses and facilities throughout northern and central New Jersey since 1992.  We understand the complexities involved in creating a comprehensive security system that is tailored to your needs.