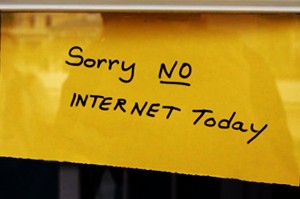 Does your security system, or part of it, rely on your company’s internet network? Or are you considering a system that is at least partially dependent on network connectivity? If so, what happens if that network fails or is compromised? Fortunately nowadays the chances of your network dropping or losing connection is pretty slim, in fact the probability of most Internet Service Providers (ISPs) experiencing an outage is about 1%. But in the rare case that it does become inactive there are methods to keep security features active, in particular network attached surveillance or IP (Internet Protocol) cameras. Maintaining an operating surveillance system is crucial to the overall effectiveness of a comprehensive security system. Surveillance footage can aid in police investigations and the mere presence of cameras can help deter criminals. Fortunately there are methods of streaming and recording footage even when your local area network (LAN) is down.

Our licensed integrators at Perfect Connections, Inc. understand the importance of security system continuity and one that functions with minimal incident. We have been providing comprehensive security solutions to businesses throughout northern and central New Jersey for almost 30 years. We specialize in surveillance systems, fire and burglar alarms, and access control solutions. There is no perfect system, but by installing redundancies and planning with prevention in mind, system issues will be few and far between.

Traditionally recorded surveillance footage would be stored on an external digital video recorder (DVR), but thanks to progressing technology and the desire to streamline everything, virtual and network storage options are becoming more popular. The cloud is becoming a popular virtual storage method that is cost effective and has seemingly limitless real estate. To find out more about the cloud, check out our post here. Whether you’re using the cloud or an external device like a DVR, it’s not a bad idea to have a back-up in the unlikely event your network goes down. Two common types of redundancies are Network Attached Storage (NAS) devices and SD memory cards.

NAS devices are installed on the same network as your security cameras. If your network were to suddenly go out or someone accidentally caused an outage, the NAS would continue recording. If you were using the cloud as your main storage and the network drops, the NAS device could be setup to automatically upload recorded data to the cloud once the network is repaired. It’s also a cost effective method as multiple network cameras can be setup to stream to the same NAS device.

SD memory cards are exactly what they sound like. They’re storage cards within the actual camera, essentially the same as memory cards used in digital cameras and other devices. This type of technology is also sometimes referred to as “edge storage.” SD cards are typically programmed one of two ways. Either they are constantly recording regardless of the network status, or they are programmed to kick-in when network connection is lost. According to Fredrik Nilsson, General Manager of the Americas for Axis Communications, using SD cards as a redundancy works best in smaller applications where there are minimal cameras. The main reason being they cost more per gigabyte of storage in comparison to NAS devices that can accommodate multiple cameras on a single device.

While the likelihood of your network failing or dropping out is pretty low it’s always best to plan for the worst case scenario. There is no perfect security system, but there are measures that can be implemented to ensure coverage when you need it most. When it comes to surveillance, it’s imperative to have continuity, therefore it couldn’t hurt to have redundancies installed when using network cameras. NAS devices and SD memory cards are two effective back-up storage methods that will help retain critical information that can later be accessed if need be. To find out which type of backup is best for your facility always consult a licensed security system integrator. Our team at Perfect Connections, Inc. has been providing comprehensive security system solutions to businesses throughout northern and central New Jersey since 1992. We understand no two businesses are exactly the same and that they should be treated with an individualized approach that suits their specific needs.