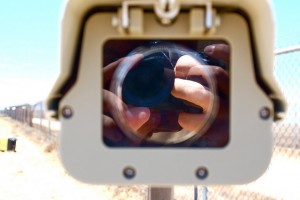 When it comes to security systems you may have heard the term “edge technology,” “edge analytics,” or “edge devices.”  What exactly do these terms mean and why are they important?  When talking about security systems “the edge” is typically used when referring to video surveillance components.  Every security system integrator and industry professional will likely have their own definition of what it means, but in summary “edge technology” refers to surveillance devices that operate, analyze, and record at their source versus transmitting all that information over a network to the system’s core.  In traditional surveillance systems there is a central server where recorded data from peripheral devices is stored and analyzed.  In an edge-based system cameras perform these functions locally.

Why is this pertinent information?  Depending on your specific situation, using edge-based technology can provide more efficient surveillance processes and enhance the overall effectiveness of your security system.  As every situation is subjective, a licensed security systems integrator should always be consulted when determining what type of components will serve your business best.  At Perfect Connections, Inc. our licensed security system integrators are committed to providing comprehensive security systems that exceed your expectations.  We have been installing comprehensive security systems at businesses throughout northern and central New Jersey for over 25 years.  We know how to assess your security needs and implement relevant technologies that will help keep business running as usual.

Surveillance components that can be considered on “the edge” are IP cameras, video encoders, and network attached storage (NAS) devices.  These devices have recently become more advanced and their capabilities that were once unique to the central server of the security system continue to improve.  According to Steve Gorski, general manager at Mobotix, “Edge-based surveillance solves the bottleneck problem by using the camera to decentralize intelligence and video data.”  This means the cameras themselves are more intelligent and effective.

Edge-based technologies allow for higher image resolutions and the ability to compress them without the loss of image quality.  Even with the use of high resolution IP cameras becoming more commonplace, in a traditional system, the images still have to travel to the central server to be stored and typically compressed; this is where image quality can be lost.   Edge technology helps reduce the need for exorbitant storage space on the central server as many edge devices are capable of storing data locally on SD memory cards or NAS devices.  Traditionally these types of storage options were primarily used as backups for the system, but they can now be implemented as the main recording devices in smaller applications.  Cutting down on the need for centralized storage will reduce the need for high bandwidth consumption, ultimately cutting costs.

According to Fredrik Nilsson, general manager for Axis Communications, “It’s estimated today that a staggering 99 percent of all recorded surveillance video is deleted before it’s ever seen.”  How does that make surveillance useful?  It really doesn’t except for use in forensic investigations or after the fact viewing, but with edge-technologies providing intelligence and analytics at the source, detection capabilities increase which creates a more effective system.  With smarter edge devices that can detect patterns, motion, facial recognition, license plates, camera tampering, and people count, you can avoid potential catastrophe that could be caused by deleting recordings to free up space.  These types of analytics provide a platform for real-time viewing that can even be streamed to mobile devices, which are also often considered part of “the edge” realm – the ultimate goal always being prevention and proactive approaches rather than delayed after the fact reactions.

With any technology, “the edge” is a work in progress and will continue to evolve.  It seems edge devices are primarily implemented in smaller applications where the camera need is less than 20.  One of the reasons being a server-based surveillance system can run more analytics per camera because of the CPU power, so the more cameras you have the more processing power you’ll likely need.  For smaller facilities and businesses with remote locations that need surveillance, edge devices are a viable option as they provide real-time analytics, can store footage locally, and don’t require a ton of bandwidth consumption.

At Perfect Connections, Inc. we are committed to providing security system solutions that fit your specific needs.  Our team of licensed integrators has been providing comprehensive security system solutions to businesses throughout northern and central New Jersey since 1992.  We realize that just because a new technology is available that doesn’t mean it is the appropriate solution to every problem.  Our integrators work with you to learn your needs and will design a custom system that addresses your subjective security risks.