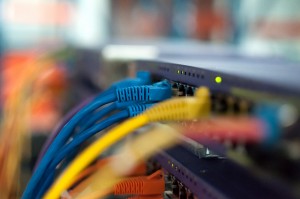 Whether you are installing a new surveillance system or changing an existing one you need to consider the type of system and the operating implications associated with it.  The desire for advanced image quality, video analytics, ease of integration, and remote access has ushered in the era of IP (Internet Protocol) surveillance systems.  IP surveillance systems have opened the door to a more integrated security system and they provide increased scalability which is important to company growth and future adaptation.  This type of surveillance system typically relies on an internet network, and as they say “therein lies the rub.”

Should your surveillance system operate on the same internet network as your office computers?  The answer is not a simple yes or no.  The short answer being it certainly is a viable option, but it could depend on the size and type of business you run.  It’s also possible to set up an IP surveillance system on its own network but it may not be cost effective or necessary.  For these reasons it is imperative to consult a licensed security system professional when altering or adding a surveillance system.

When it comes to a company’s network there seems to be some trepidation about how and what devices can and should be allowed on it.  It’s understandable, a company’s network is often a basis for its everyday functions, but where does the worry come from?  A lot of it usually has to do with a communication gap between security integrators and IT professionals or end users.  At Perfect Connections, Inc. our licensed experts are able to provide clear and understandable information about the surveillance equipment we implement and how it will affect your company’s network.  We have been providing comprehensive security system solutions to businesses throughout northern and central New Jersey since 1992.  Our team has witnessed and been a part of the migration from mainly analog surveillance to IP.

Let’s discover the common concerns about network devices and how they can be dissolved, but first we’ll review some quick terminology when talking about networks.  LAN, MAN, and WAN are three basic types of networks you’ll likely hear about from integrators and IT professionals.  Local area networks (LANs) are typically found at most small to medium sized businesses as they cover a smaller more specific area.  In all likelihood your company operates on a LAN network.  Metropolitan area networks (MANs) cover a larger area and are usually present in cities and across large campuses.  Wide Area Networks (WANs) provide the most coverage, anything from expansive distances to the whole world.  According to Fredrik Nilsson, general manager for Axis Communications in North America, WANs are often comprised of multiple smaller networks including LANs and MANs.

All networks are comprised of some sort of cabling and equipment such as switches, servers, and hubs.  The most popular type of network configuration used with LANs is called star.  A star configuration allows all network devices to be connected to a central point where if one device crashes the rest will remain in operation.  However, redundancies are typically incorporated to account for the possibility of a central station crash.

Now that terminology is out of the way, what are some of the major concerns one might have when adding surveillance equipment to a company network?  One of the most common is bandwidth consumption.  This often stems from companies that have had to deal with employees streaming or downloading videos via company networks which eats into the available bandwidth.  According to James Marcella, director of technical services for Axis Communications, IP surveillance equipment is wrongly accused when it comes to bandwidth consumption.  He says most IP cameras today can be customized to fit a company’s network and storage guidelines.  To help limit their consumption surveillance can be setup on a Virtual LANs (VLANs) which Marcella says, “prevents video traffic from grabbing the lion’s share of bandwidth.”

Then there’s the ever-present question, “what about hacking?”  In our world where virtually everything is connected through the IoT (Internet of Things), it’s hard not to worry about who can access private information and how that information is being protected.  Having surveillance equipment on the same network as your company computers may seem scary, but in reality, more oft than not, there are procedures in place to prevent hacker access.

When it comes to adding network devices and keeping the network safe authentication protocol and data encryption are key.  According to Marcella authentication protocol protects the network at the physical port level.  If someone were to unplug a network camera and try to plug in their own device, all “traffic” to that port’s switch would automatically be shut down as the foreign device wouldn’t have the proper authorization.  Data encryption is essentially creating a password to your network whether it’s wired or wireless.  This prevents someone from getting into your network or freeloading on your company’s internet.  Encryptions can be highly effective as long as they are not something obvious or easily guessed.

Lastly, network storage is a top concern.  This is often directly linked to bandwidth consumption concerns.  Due to high image quality of IP camera recordings it’s not uncommon for businesses to store video footage for longer periods of time.  Fortunately, with IP surveillance systems you don’t necessarily have to store recordings directly on the network.  For smaller installations there is the option to utilize in-camera storage through internal SD cards (Secure Digital Cards).  Network Attached Storage (NAS) devices and cloud-based systems are other viable options.  In order to determine which method is best for your company an evaluation of camera quantity and storage needs should be conducted.

Whether you are adding a new surveillance system or updating an existing one it’s imperative to consider the impact it will have on your company’s network, if any at all.  Always consult a licensed security system professional as they can help guide you or your IT department through the process from initial assessment to final installation.  Our team at Perfect Connections, Inc. has been providing comprehensive security solutions to businesses throughout northern and central New Jersey for the past 23 years.  We can help break down the communication barrier that sometimes creates apprehension when installing network devices.